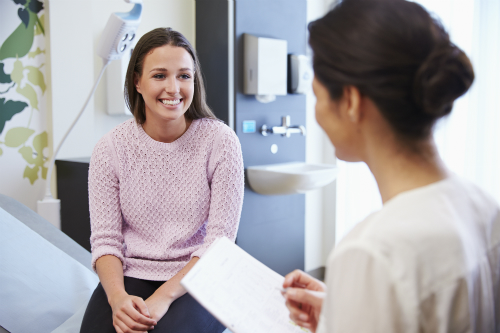 It appears that IUDs and IUSs have the highest probability of being accepted by women if attention is given to the provision of correct information to dispel myths and misconceptions, and providing proper selection of the intrauterine method, comfort at insertion, and correct fitting.

Erratic and heavy menstrual bleeding is the most common cause for IUD discontinuation. The impact on menstrual blood loss with copper IUDs can be minimized by reducing the surface area of the foreign body. The small frameless GyneFix 200 IUD, releasing copper ions from the outer as well as inner surface of the copper tubes, does not increase menstrual blood loss in contrast to all other copper IUDs simply because it is much smaller. On the other hand, all hormone-releasing intrauterine systems strongly reduce menstrual blood loss. Many users of hormonal IUDs develop amenorrhea (have bleed free periods). In many countries this is becoming a trend. Several measures are possible to manage erratic menstrual bleeding and spotting if present.

IUDs are expelled and cause perforation

Total expulsion of a conventional IUD occurs in 5-10% of women during the first year of use, with an increased risk in nulliparous women. The majority of expulsions occur during the first months after insertion, with 1-2% per year thereafter. Frameless, anchored IUDs reduce the risk of expulsion approximately 5 to 10-fold, on condition that the IUD is properly inserted. The overall risk of perforation with IUD insertion is around 1-2/1000. Perforation is often caused by unskilful insertion, poor technique due to absence of training, and lack of attention to contraindications. Women should discuss these issues with their providers. IUDs that do not fit can progressively migrate through the uterine wall due to forceful contractions of the uterus.

IUDs are not effective 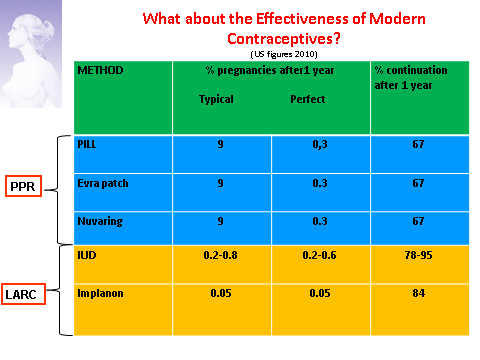 This slide shows that women should use effective methods on a large scale that can be forgotten once initiated, and are usable ‘first-line’ by adolescents. Long-acting IUDs and hormone-releasing intrauterine systems are methods which point the way forward, even if it takes time to the woman to accept a foreign body in the uterus.  A major advantage of long-acting hormonal methods is that they eliminate the need for specific action at the time of coitus such as putting on a condom, or for daily action, such as the pill. They offer discretion and privacy. Intrauterine devices and intrauterine systems are particularly attractive as they have the advantage of acting locally, avoiding systemic effects. They have less impact on menstrual pattern after the first few months and, when low dose levonorgestrel intrauterine systems are used, they are less likely to cause initial spotting, amenorrhea and hormonal side-effects. New developments in intrauterine technology are providing smaller frameless devices and devices that combine the features of a frameless copper device with a levonorgestrel system. They may be ideal for use in younger women because they are small, effective and well tolerated. Unlike the pill, they are genuinely ‘fit-and-forget’. In use, they are much more effective than pills in this age group.  Moreover they are long acting and reversible. So, the reward is substantial.

IUDs cause pain and embedment

IUDs do not necessarily have to cause pain during use if properly fitted in the uterine cavity. Providers should select a particular IUD/IUS based on an estimation of the size of the uterine cavity. A standard IUD size will not fit cavities of every size and shape. Frameless IUDs are particularly useful for use in nulliparous and adolescent women as they are flexible and do not cause any distention of the uterus. IUDs that are too big will often embed in the uterine wall. Each woman should request their doctor to select an IUD/IUS that fits into her uterus.

One of the reasons of the underuse of the IUD is the fear of insertion pain. The insertion of an IUD is not usually a painful procedure. However, many women, nulliparous women in particular, fear insertion and this may be an important reason not to select an IUD. Several measures can be used to reduce patient discomfort during the insertion and removal of the IUD: premedication, local anaesthesia, cervix relaxing agents, and anxious patients should ask for it. Should physicians pay attention to pain relief, it is likely that many more women will request IUDs as their method of contraception. Taking care of pain relief is important. When counseling, the provider should inform the woman about the insertion procedure and about the measures he/she will take to make insertion less discomfortable.

Another myth is that women over 25 years are the best candidates for IUD use. This belief, based on the fear of pelvic infection (PID) and the potential for resulting infertility, is no longer justified. There is no biological reason to conclude that a young woman is at higher risk than an older woman provided they have similar sexual behaviours.

The risk of ectopic pregnancy in IUD user has been thoroughly investigated. The risk is 10 times lower in IUD/IUS users than in the general population of women using no contraception (0.0-0.5/1000 women vs. 3.25 to 5.25/1000 women). This finding has been confirmed by a meta-analysis of 16 case-control studies. A previous ectopic pregnancy is not a contraindication for the use of an IUD/IUS.

The issue of increased risk or greater severity of sexually transmitted infection (STI) among IUD users has been a prominent concern. However, the rate of pelvic inflammatory disease (PID) is low, with cases concentrated in the first 20 days after insertion. The reason for the increased risk during the first weeks after insertion is that bacteria in the vagina and cervix can be transported through the cervical canal into the uterine cavity. It is important to tell the IUD user that for the majority of the users, fertility is restored immediately after removal of the device; irrespective if of whether the IUD was used for a few months or for many years.

IUDs do not terminate a pregnancy. The primary contraceptive effect of intrauterine contraception is the prevention of fertilization and implantation by interfering with sperm motility and survival. The reaction of the intrauterine foreign body with the endometrium activates the release of leukocytes and prostaglandins which act not only in the uterus but also in the oviduct and cervix to impede sperm and egg development.

In his clinic in Ghent, Dr. Wildemeersch organizes training sessions for doctors from inside and outside Belgium, interested in learning the anchoring technique of frameless intrauterine devices.
The clinic is specialized in providing precision intrauterine contraception to fulfill women's needs.